A Commemorative Service was held at Kokoda Park, St Marys on Saturday 11th to remember all who have sacrificed for Australia in conflict and, this year in particular, to commemorate the 75th anniversary of the completion of the Kokoda Track Campaign of 1942 to halt the Japanese advance towards our nation.

Poems were recited by their authors - sub-Branch member Tomas Hamilton delivered his thoughtful poem 'Chocos' in honour of those who first faced the Japanese on the Kokoda Track; Hon Tanya Davies delivered her special poem she wrote after completing the Track crossing herself and in related memory of her Grandfather who had fought there. 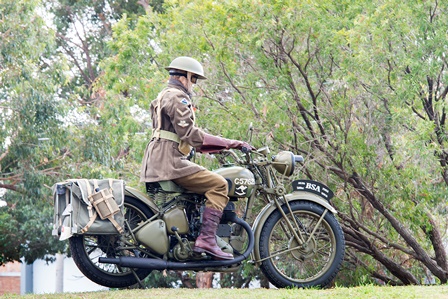 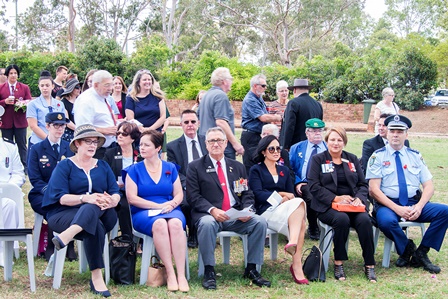 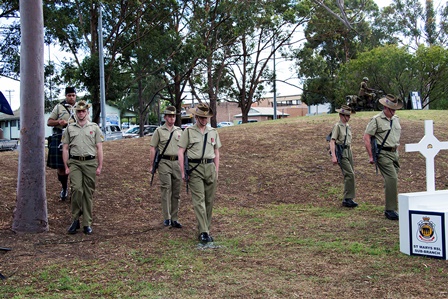 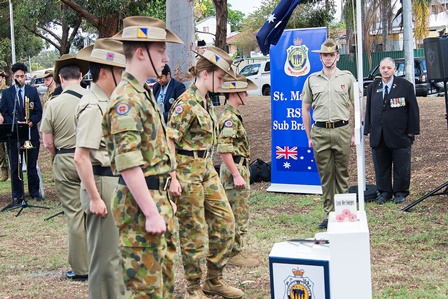 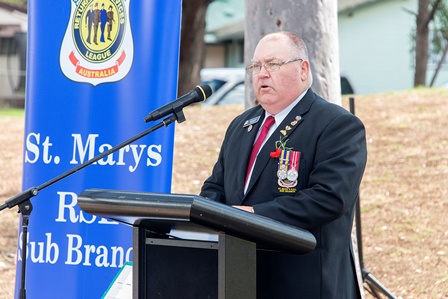 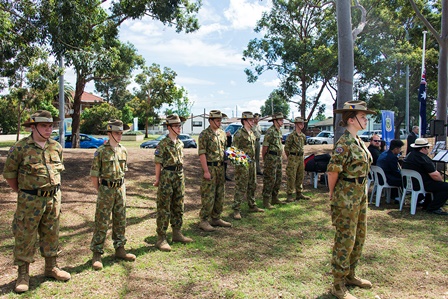 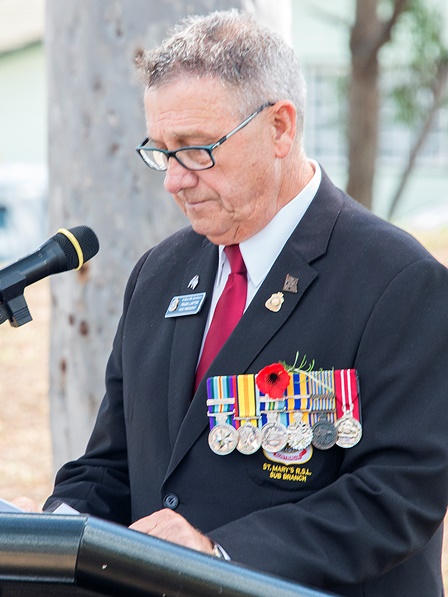 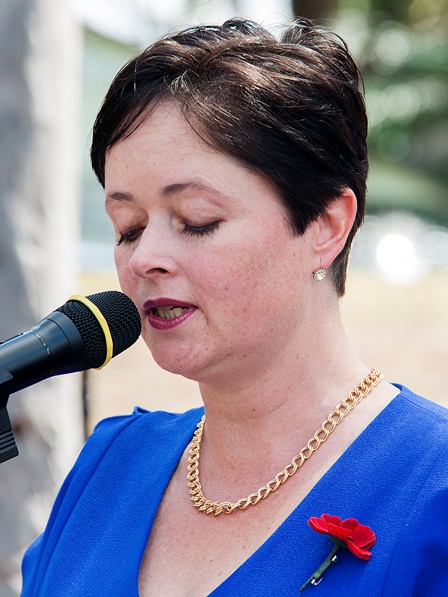 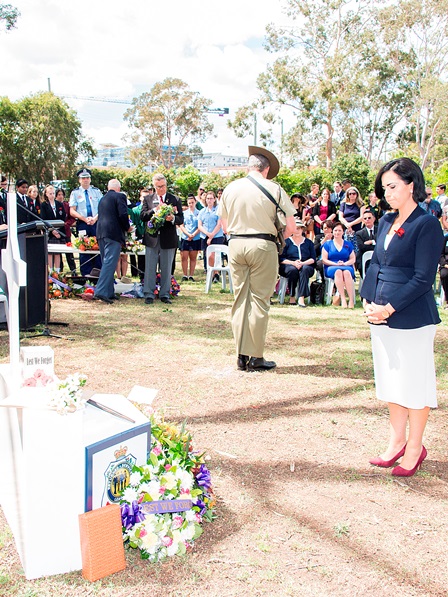 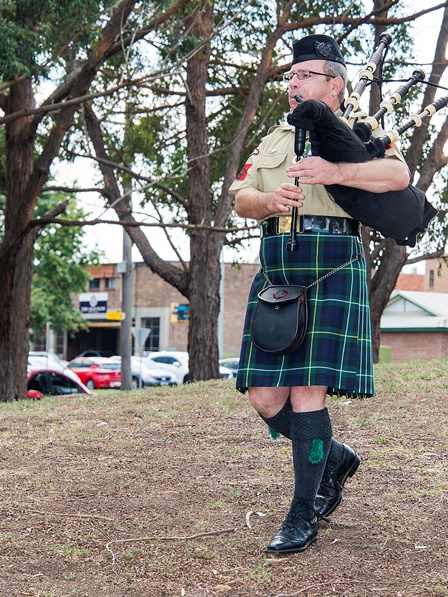 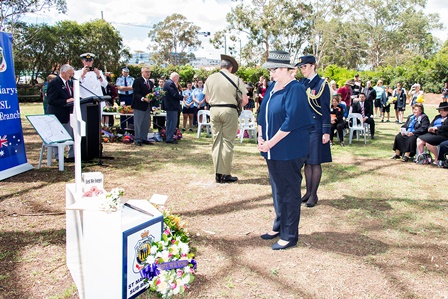 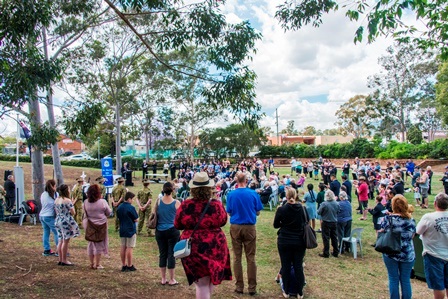 Well ... what can one say ... we were overwhelmed with the continued interest within the St Marys community to participate in the ANZAC reflection period. Estimated at in excess of 6,000, the huge crowd filled the car park at St Marys RSKL Club and overflowed to the road, to witness a splendid ANZAC Service at our new Cenotaph. The added lighting and well-prepared audio-visual apparatus ensured (hopefully) all present could ably hear and see the activity at the centre. Again, 5 Engineer Regiment provided a marvellous Catafalque Party and 21 Army Cadets a splendid Banner Party - thank you to those soldiers. With the continuation of our Korean War Remembrance theme, our past President's descendants visiting from Queensland (Glenda, Judith, Dorothy, Breanna, Summer and Billy) assisted us do honour to the memory of our comrade; Glenda paid memorable tribute to her Dad. Glenda also recited the poem, 'Kapyong 1951' authored for the Services by Sub-Branch member, Tomas Hamilton. Again, the creative projects from four local schools (Erskine Park and St Clair High Schools and Emmaus and Montgrove Colleges) were on display; the HAKA from St Clair Comets was again a very pleasant surprise to many. Local MPs Prue Car and Tanya Davies, Senator Doug Cameron, Superintendant Greg Peters (St Marys Police LAC) and other dignitaries enjoyed the Service. Sub-Branch President, Ron Blakely provided a concise focus for the Service while Vice President again MC'd the event.

With weather on our side, about 450 attended or participated in our local community ANZAC March and Service on Sunday 23rd April. While it was still in the School Holiday period, we were pleased to see 10 of our local schools participating in the March. The ANZAC Address was delivered by Dr Daryl Chamberlain, our revered local GP and supported of all veterans - thank you Daryl for your thoughts and reflections. Our other special guests for the ANZAC period were three daughters of Capt Reg Saunders MBE, Glenda, Judith and Dorothy, and three great grandchildren, Breanna, Summer and Billy. They assisted us in our special reflection on that Forgotten War, the Korean War; the Battle of Kapyong in particular; and of course our past President Reg Saunders, the first indigenous soldier to become a commissioned officer in the Australian Army - thank you to Reg's descendants who helped us make this ANZAC period so special locally. We were assisted again this year by the Kings School Marching Band, together with the St Marys Pipes and Drums and the Erskine Park High School Band who played our Hymns and National Anthem as well as pre-Service music. 5 Engineer Regiment provided our Catafalque Party while 21 Army Cadets helped with a range of tasks. Tomas Hamilton, a member of our Sub-Branch, recited a poem, 'Kapyong 1951', which he especially authored for our Services. Our MC, Vice President Frank Lawton, did a splendid job; we were very pleased also to receive our Mayor of Penrith, Cr John Thain, along with our local MPs in Prue Car and Emma Husar, and Superintendant Greg Peters, St Marys Police LAC. Four schools participated in an activity to focus on ANZAC and Kapyong - Erskine Park and St Clair High Schools and Emmaus and Montgrove Colleges - we appreciated the creativity and effort that went into their displays. Sub-Branch President, Ron Blakely was very pleased with the outcome.